Is still cooking, currently on simmer while we hunt for funding.

Interro/ inˈter.ro Reconstructed, hypothesized LATIN
In (into) and terra (earth)
verb I bury; I inter.
bang bang/ noun a heavy blow; a sudden loud noise; an explosion; (inf) a burst of action; (sl) a sense of excitement

MY AFTERNOON AS AN OLD EAST ENDER

"Audience participation fills me with fear: I’d rather eat my own hair than get up on stage or take part in improvised comedy.
So how did I end up at a surreal Fifties tea party with a group of complete strangers in a quiet Hackney back street last Saturday? AT HOME WITH THE SKINNERS is part theatre, part performance installation.
At 4pm I joined the queue in front of the house that had been transformed into a pitch perfect Fifties semi and waited to be invited in for tea.
The east end party is being held in honour of Eva who is celebrating her 29th birthday. We're introduced to her sister Marion and her kids  (eight year old Lillian is played by a handsome man in a dress), plus Nanna and Uncle Bernie, who everyone rightly warns you to avoid because he has Christmas hands (a wonderful euphemism for the lechy bachelor),

The space is propped brilliantly with all the home furnishings I remember from childhood (most families still had 50s decor in the early 60s). In the corner is a table groaning with sandwiches, Battenberg cake and sausages on sticks! The "food porn" I remember well from Hoggard family gatherings
I’m still in an agony of embarrassment but things get much better when Eva opens the sherry (don’t they always?) and we play a hilarious 50s card game called  "impertinent remarks".
Its a bit like being in an episode of EastEnders, except there is a serious undertone. Dreamed up by co-op Gideon Reeling (purveyors of bespoke experiences) At Home with The Skinners has proper arts funding.
It’s one of six award winning projects commissioned by car company Vauxhall, and the judges included representatives from the BFI, Donmar warehouse, Hayward Gallery and the ICA.
It’s all great fun but this is a slice of white working-class life that rarely gets celebrated, you realise that for all the camaraderie, there is pain beneath the pancake and the lipstick. The song " My Old Man Said Follow the Van", is actually about repossession. Eva confesses she will have to move in with her in-laws. You sense it may not be a happy marriage.
After one last sing song, the Skinners chuck us out. They need to hold the tea party at least twice more today. You marvel at the actors' stamina. Did they really train at Rada to spend days making fish paste sandwiches? They seem totally uncynical.
I’ll probably never learn to love audience participation but it’s hard to beat such an original afternoon in London for £10. And frankly I’m hooked by Eva's love life. Just try to keep me away from that wedding 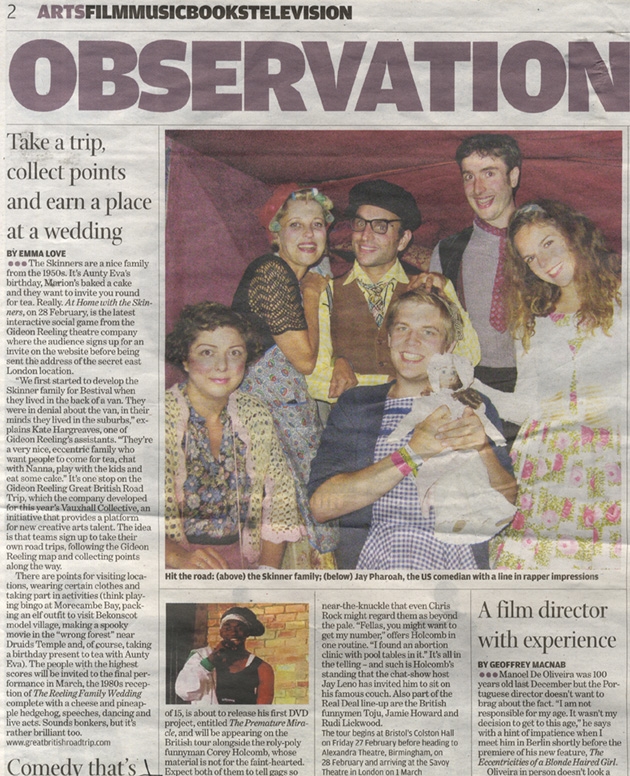